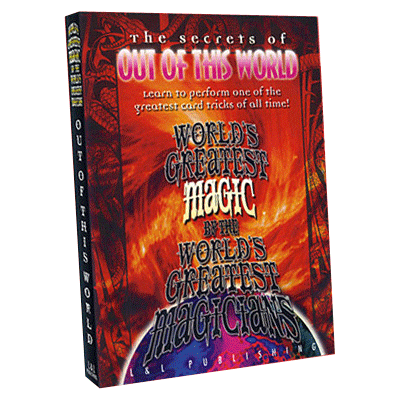 Out of This World (World's Greatest Magic) video DOWNLOAD

SKU: 47952
CA$14.95
CA$14.95
Unavailable
per item
Imagine owning the most comprehensive magic book ever written. This would surely be a treasured possession for any magician with each chapter focusing on a single aspect of the craft and the very best routines ever created for it. That's the idea behind L&L Publishing's critically-acclaimed series, The World's Greatest Magic by the World's Greatest Magicians. Each volume is like another chapter in the world's best magic book. Featuring in-depth exposition and instruction on some of magic's most cherished and classic effects by its most-talented practitioners, this unprecedented series represents an essential reference work for anyone interested in the magical arts, regardless of their skill level.

In 1942, magician Paul Curry invented a card trick that would take the world of pasteboard sorcery by storm. Dubbed Out of This World, this effect, where a spectator separates the red cards from the black ones without looking at them, featured a very rare combination of an extremely powerful effect with an almost self-working methodology and quickly became the most talked-about card trick of its time. You'll meet five different performers who each has a singular take on this classic trick. Michael Ammar is first with an easy-to-perform version that echoes Curry's original method. Steve Draun is next with a streamlined version that eliminates any packet switches in the middle of the effect while David Regal takes the Curry methodology a step further, with the spectator not only separating the cards by color but by suit, also! Glenn Falkenstein uses a classic Triumph-like effect to set the deck up for his version of Curry's miracle while, finally, Eugene Burger offers some thoughts, not just on the methodology, but more so on the presentational aspects of the trick.

Curry later recalled that the concept of the trick came to him in about 15 minutes and he didn't understand why it would fool magicians. But, fool them it did! Curry's brainchild has become one of the most famous card tricks of all time and in fact, in the famous Genii-Orben poll, was voted as one of the greatest tricks in magic history. What's more, it can now be a part of your own repertoire as an anytime, anywhere, any deck miracle.
Add to Cart