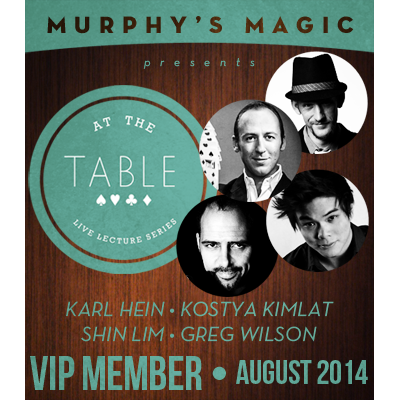 SKU: 53866
$19.95
$19.95
Unavailable
per item
August VIP means 4 EXCLUSIVE and AMAZING lecturers for you to watch and enjoy! What does becoming a VIP Member mean? It means getting all 4 lectures for less than the price of 3! For just $19.95, you will be able to watch LIVE or download later.

In August, you will see:

Karl Hein: Karl Hein is no stranger to magic. Known around the world for his amazing skills with a pack of cards as well as his disarming performance style; Karl will present to you a lecture that will blow you away! Having presented over 100 lectures in more than 15 countries, Karl is known for some amazing pieces of magic including The Heinstein Shuffle and his hit trick, "Heiny 500." Karl will present to you routines, sleights, flourishes, and principals of magic that only a seasoned professional like Karl can do. Karl is one of the few magicians today who are as comfortable doing parlor as strolling magic, and he has developed incredible magic for both venues. This is a GREAT lecture that CANNOT be missed! Karl's lecture will include: That Would Be A Freaking Miracle - Karl's easy and commercial Three Card Selection Routine where a spectator finds the cards with several amazing kicker endings. Karl will use this routine to discuss card selection, card control, revelations, multiple moments of amazement, routine construction and alternate presentations such as...

Hat Trick - An alternate presentation for That Would Be A Freaking Miracle, where the magician finds the three selections in his hat or the hat of a spectator.

Transformer Triumph - An in the hands Triumph Routine with multiple magic moments. Karl will use this routine to also teach and talk about tips for the following False Shuffles, Cuts and Flourishes.

Heinstein Shuffle - The classic in the hands false rifle shuffle with a bridge.

Give Me Five - A production of a five dollar bill that can be used just about anytime.

Pathways - A double prediction effect with a new touch on combining equivoque and multiple outs. Karl will also use this routine to teach 2 multiple out systems including:

Heiny Switch - A prediction written on the back of dollar bill.

Out of Your Mind - Karl's unpublished work on the classic Paul Curry effect "Out of This World."

Grandmother's BLT - Karl's un-gimmicked version of Ryan Swigert's "Kickback" which is guaranteed to give any laymen or magician a moment of pure astonishment.

Kostya Kimlat: Kostya's magic is just as unique as his name! Having created some of the finest magic around, including "The Roadrunner Cull", and "Warning/Warning 2.0", Kostya will present to you an interactive lecture like you have never seen before. Having performed and lectured all over the world, Kostya will present to you a unique presentation that utilizes visual media to bring to life an all new lecture. Come join Kostya on a 2 hour journey that can ONLY be seen At the Table!

Shin Lim: What can be said about Shin Lim that hasn't already been said? This guy is amazing on many levels. He creates some of THE most visual and stunning magic that you will EVER see, including "The Switch" and "IClear". Some of this has to be seen to be believed. In his lecture, Shin will share with you some of his gimmicked wonders, and will even share material that has not been released before. He will also talk about his creative process, theory, music, timing, syncing, connection, and atmosphere. Shin will also perform his FISM act, and then break it all down for you. THIS is a lecture you just cannot miss. Shin will cover:

Sleights: Shinsplint 2.0: An impromptu 'Twisting the Aces' effect that happens in the most visual way possible. You cleanly hold four aces with just your fingertips and magically, one by one, they invert themselves!

4x4 color change: (This is Shin's favorite way to change four cards out at a time.) Imagine holding four aces and with just a wave of your hand, they immediately change into 4 kings!

Color Changes: Shin Lim is known for his visual eye candy magic. Prepare to witness his favorite original color changes, as well as his take on some classic changes too!

Credit Peak: (Completely impromptu) With a borrowed deck of cards and credit card, imagine being able to predict any selected card in the most fair way possible.

Card Reverse: While springing the cards, imagine being able to easily reverse a selected or thought of card. Think of an impromptu Invisible Deck!

Tactic: This gimmick will allow you to vanish a folded card in a Tic-Tac box. It's clean, easy, and has multiple routines and unlimited possibilities. Shin goes over just some of the ideas and routines that he has thought of.

ROUTINING: Shin will be performing his FISM act, and will then break down and cover parts of the act.

Greg Wilson: Greg is a 2 time FISM-winning magician. He has been hailed as one of THE most creative thinkers in magic. With best-selling hits like "On the Spot," "Hundy 500," and the newly released "Exact Change" and "Flash Pen," Greg has enough material to cover practically every genre of close-up magic. In his lecture, Greg will focus your attention to his uncanny ability with a deck of cards, as he performs and explains in detail all of the inner workings that make his magic so unforgettable. What we're particularly excited about here is the various effects Greg will tip that he typically does NOT discuss in his live lectures for magicians.

This is a subscription product. After you subscribe, you will have instant and permanent access to 30 days of lectures and be billed every month.
Add to Cart