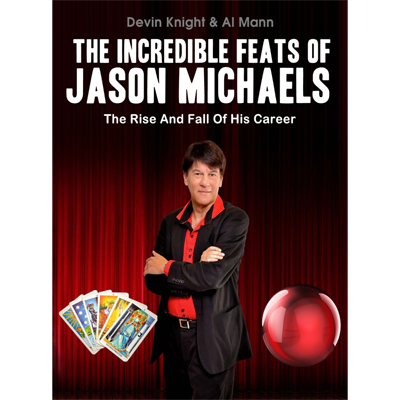 SKU: 55542
CA$19.95
CA$19.95
Unavailable
per item
Jason Michaels was an extraordinary psychic during the 80s. (Jason was actually a pseudonym of Devin Knight.) He shot to national stardom almost overnight with his headline predictions that appeared to be the real thing; even to top mentalists such as Al Mann. He stunned reporters nationwide with his ability to levitate in newspaper offices. Yes, before self-levitations became popular Jason Michaels was doing it. That is because he was one of the early innovators of the effect. It did not stop there; he made himself invisible, caused clouds to vanish from the sky and outdid other mentalists by driving cars blindfolded with the windshield covered with newspaper!

Jason Michaels caught the attention of Al Mann, who offered to help mentor him into fooling psychic researchers. Later, Al Mann and Jason, wrote the highly sought after, The Incredible Feats Of Jason Michaels book that was used by researchers to debunk Jason Michaels.

Who was Jason Michaels? How did he rise to stardom almost overnight? How did Jason and Al Mann get connected? What was the real reason for Jason's debunking and what brought it on? How did Jason virtually disappear from the face of the earth after his debunking, never to be heard of again by the general public or reporters?

Devin answers all these questions in this revealing book. He also includes a scan of the original Al Mann manuscript that was used to expose him and put an end to a very successful career as a psychic.

Devin can share this scan, because he was the co-author of the book. All the material were effects and secrets that he gave Al Mann permission to share. They were his exclusive effects and he retained rights to the effects.

In addition to effects, the book contains many early newspaper clippings showing the incredible publicity Jason got in newspapers using these feats. This includes a front-page story with a photo of him levitating in a newspaper office facing the cameras!

The Contents: Here is your chance to see the book whispered about, but seldom seen. This information is released for historical and research purposes. This is a highly sought after book and original copies on eBay have sold for several hundred dollars.