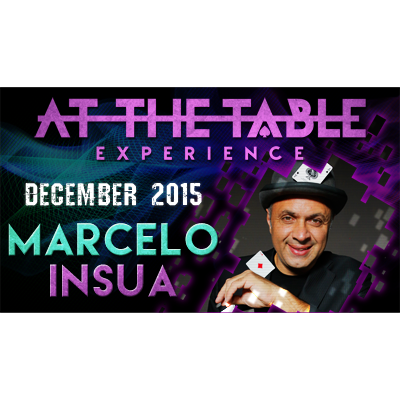 SKU: 56554
CA$7.95
CA$7.95
Unavailable
per item
Marcello Insua, founder of Tango Magic and the famous Bar Magico, joined us for an At-The-Table experience! With over 200 lectures under his belt, you can expect time-tested routines, from coins to cards to mentalism.
Add to Cart

Marcello's ingenious ideas have won him the most prestigious awards in Magic, have a look at some of the routines you can expect to learn:

Invisible Deck - Be able to do The Invisible Deck without a gimmicked deck! Have the spectator name their favorite card and once they do you ribbon spread the deck on the table and the spectators thought of card is the only card turned face up. Everything is examinable!

Invisible Cards - Any number is chosen and a card is selected by a little bit of imagination from the spectator. Let's say they pick 18 and the 3 of clubs. The deck has been on the table the entire time! The spectator takes the cards out of the box and counts 18 cards down to the 3 of Clubs!

A.C.A.A.N - Learn not one not two but THREE Any Card At Any Number routines that will for sure have your audience baffled! Any number and any card is named and once they do they count down that number to the card that they named.

Bottle Production - What better way to start a show and grab the audience's attention than to produce a bottle of wine!

T.U.C. Coin - This is a gimmick that every magician should have. Marcelo reviews the gimmick that won him "Invention of the year award" Learn a devious Coin Matrix, 3 fly & more! Ring & String - Thread a spectators ring with a string and visually melt the string off the ring!

Nail Writer - Marcello covers some brilliant routines that will make the spectator believe you can really predict the future. He covers everything from subtleties to handling to make you be very comfortable using a nail writer.

Silk Reel - Cause a silk to penetrate your arm!!!

Masina Matches - Two small sticks are shown and a dot is drawn in the middle of both sticks on one side of the sticks. The dot then travels to the back and then they vanish off completely off the sticks. A great visual routine that involves the spectator!

Shared Dreams - A routine that will play great on stage or even close a show with! Marcelo takes out 3 sealed envelopes and places them on the table. He then asks the spectator to create a perfect vacation and at the end of the routine is a letter from Marcelos and within that envelope that is opened by the spectator states everything that the spectator says within a comedic letter

Chop Cup Without A Chop Cup - A beautiful routine from Marcelo's personal arsenal it's a chop cop routine that doesn't use a chop cup! You'll have to see to believe!